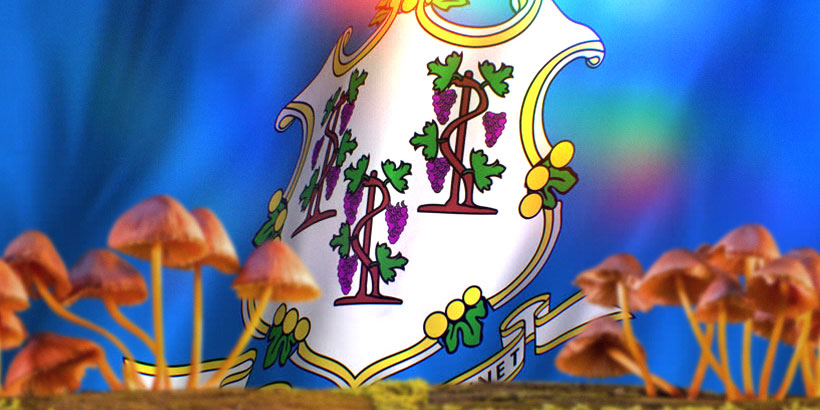 Drug law regarding psilocybin is pretty straightforward when it comes to Connecticut. As it stands, the possession of “magic mushrooms” is expressly prohibited within the state. Citizens caught with psilocybin or psilocin mushrooms can face severe criminal penalties in the form of a felony charge.

Connecticut still classifies psilocybin as a Schedule I substance, putting it in the same category of serious drugs like heroin. It’s unclear right now whether or not Connecticut lawmakers will adjust their laws in the future. But for right now, the state still totes some extremely serious drug policies prohibiting the possession, sale, and growth of psilocybin mushrooms.

Please note that although these spores are not prohibited under Connecticut law, growing them to mature mushrooms can constitute a serious crime.

The main law pertaining to drug classifications and possession penalties in Connecticut is Conn. Gen. Stat. § 21a-240(23). Under this statute, psilocybin is a Schedule I substance. Specifically, Connecticut classifies the chemical compound as a “hallucinogenic substance.” Along with mescaline, peyote, silocyn, and LSD, psilocybin possession carries serious criminal penalties.

Under Connecticut law, there does not seem to be a simple or “misdemeanor” charge for the possession of Schedule I hallucinogenic substances. Regardless of the amount, possession of psilocybin will result in a felony possession charge. Possession in a first charge can result in up to five years of prison time and a fine of up to $2,000.

It’s tough to say what the future might hold for Connecticut. The state has some tough laws prohibiting the sale or possession of psilocybin mushrooms. Even more distressing for decriminalization efforts is the fact that the state seems to be trying all psilocybin possession crimes as felony offenses.