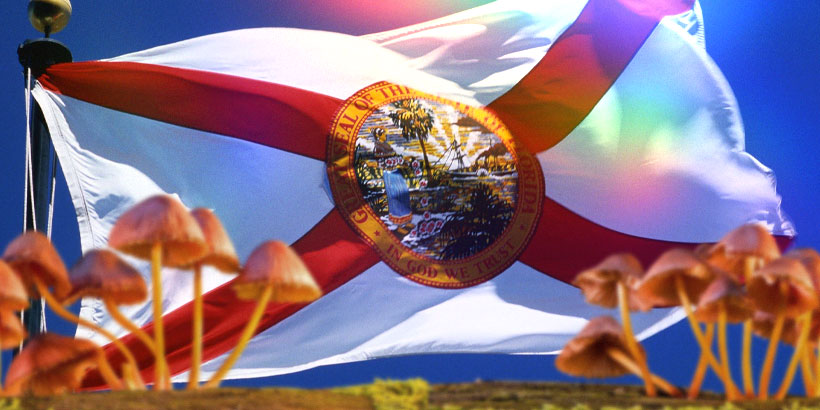 Florida has one of the most unclear and complicated legal frameworks for psilocybin in the United States. It’s important to first note that Florida law classifies psilocybin as a Schedule I substance. This makes the possession of mushrooms containing psilocybin a criminal offense punishable under Florida law. So in this aspect, the state’s view on “magic mushrooms” isn’t too hard to understand.

But a quick Google search should reveal that the state’s practical application of this law gets a little bit muddy. This muddiness comes mostly from a decision from the Florida Supreme Court, Fiske V. State. In this case, a citizen petitioned the state’s highest court to reverse his conviction for the possession of psilocybin mushrooms. The court ruled that, because the average individual is unlikely to have the knowledge to know whether or not a given mushroom will contain psilocybin, they can be excused for violating the law.

This guide will go further into detail about the complicated realities of psilocybin law in Florida.

Spores are legal to possess in Florida. This is pretty cut and dry. Florida law prohibits the possession of mushrooms containing psilocybin, the key psychoactive/hallucinogenic ingredient in magic mushrooms. Psilocybin spores do not contain psilocybin until they mature into fully grown mushrooms. Because of this, it remains legal to possess or distribute psilocybin mushrooms in the state of Florida.

Be aware, however, that growing these spores into full mushrooms might amount to the manufacture of a controlled substance. This could mean serious felony charges and criminal penalties.

This notorious Florida Supreme Court case is one reason that the state’s psilocybin laws can be very confusing to citizens. Defendant Fiske had picked wild mushrooms in Florida that contained psilocybin. Because he was caught and psilocybin-containing mushrooms are prohibited by Section 893.03 of Florida’s state statutes, he was given a serious possession charge.

But when this charge was contested in court, the Florida Supreme Court made a significant decision. They reversed the decision of the lower court, ruling that the law was unconstitutional as it applied to this particular case. To the court, the average citizen picking wild mushrooms cannot be expected to know automatically that the mushrooms they pick contain psilocybin.

The important distinction here is that the court found that the law was unconstitutional and non-applicable in this specific scenario. Some citizens have interpreted this to mean that psilocybin mushrooms are legal to possess and sell. This is not the case. Instead, Fiske V. State just sets the precedent that picking wild mushrooms does not necessarily constitute a violation of the law banning psilocybin. The court still maintained that the law itself is constitutional, even though it can only be applied to individuals who either don’t pick the mushrooms themselves or who are aware of their illegal status.

We don’t recommend that Florida citizens interpret the Fiske V. State decision to imply that magic mushrooms are legal in the state. While the case can be used as a precedent for defense against psilocybin possession charges, the drug remains illegal within the state of Florida.