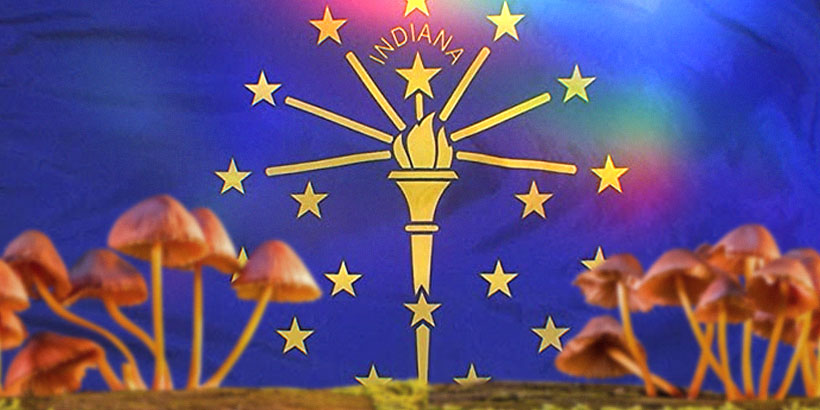 Like most states, Indiana still classifies psilocybin as a Schedule I controlled substance. As many readers familiar with USA drug law already know, this means that psilocybin is extremely criminalized. Possessing psilocybin can result in serious criminal charges in Indiana. As a Schedule I substance, the hallucinogenic compound is listed alongside dangerous drugs like heroin and methamphetamine.

It is still unclear what might happen in the future regarding psilocybin in the state of Indiana. But we do know that, as of July 6, 2020, magic mushrooms are highly criminalized in Indiana. Possessing, selling, or manufacturing psilocybin mushrooms constitutes a criminal offense.

Good news for fans of mushroom spores. Despite the criminality of psilocybin, spores are legal to possess, sell, and buy within the state of Indiana. Citizens can purchase psilocybin spore mushrooms on the internet from hundreds of vendors and have them shipped right to their homes.

A major warning though: don’t try to grow full psilocybin mushrooms out of the spores you buy in Indiana. Doing so could land you in major legal trouble, as it could constitute the manufacture of a controlled substance. This is because psilocybin does not actually develop in mushroom spores until they fruit into fully grown mushrooms. Drug manufacture charges are far more serious than possession charges, so think twice before growing mushrooms out of spores.

Psilocybin is classified officially as a Schedule I substance under IC 35-48-2-4 of the state’s legal code. More specifically, readers will find psilocybin (and psilocyn) under the “hallucinogenic substances” section of the statute. It might be the case that these substances are treated differently than the other narcotics in the Schedule I list, but this is unlikely.

Because it is a Schedule I substance, possessing psilocybin in Indiana could lead to serious criminal penalties, including fines and/or imprisonment.

There’s little reason to think that Indiana lawmakers will soon legalize or decriminalize psilocybin mushrooms. While spores remain legal to possess, even growing these spores into fully grown psilocybin mushrooms could constitute a serious crime. Hopefully, the future will lead to change within the state as other states continue to consider decriminalization. But for now, Indiana clearly prohibits the possession of magic mushrooms.