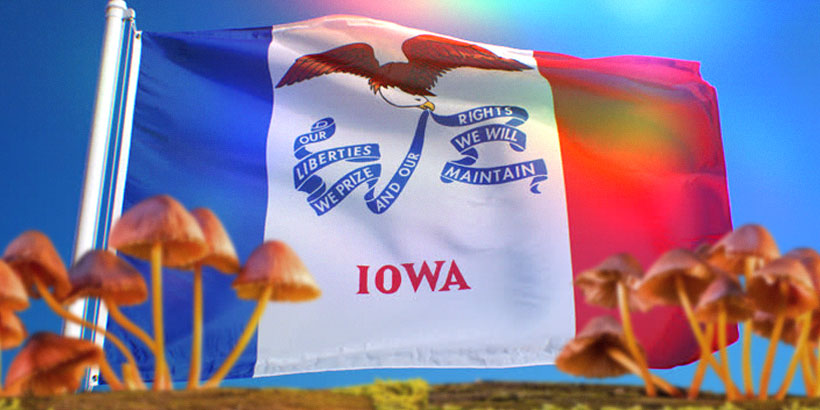 Iowa is known for a few things, including its football and high agricultural output. But when it comes to progressive drug policy, the state doesn’t have much to offer. As of 2020, psilocybin is classified as a Schedule I Controlled Dangerous Substance (CDS) within the state of Iowa. This means that the possession of psilocybin or “magic” mushrooms can carry serious legal consequences for citizens.

Psilocybin law can be tricky, especially as some jurisdictions in the USA consider decriminalization or outright legalization of the hallucinogenic drugs known as psilocybin mushrooms. This guide should walk readers through everything they need to know about the basics of psilocybin regulations, laws, and criminal penalties in Iowa, U.S.

As of now, magic mushroom spores are legal in Iowa. As we’ve covered before in our guides, psilocybin mushroom spores don’t actually contain any psilocybin. Because of this, all but three states in the U.S. allow citizens to buy, sell, and possess psilocybin spores. Researchers and fans of mushrooms in general often collect and experiment on spores, and they can be purchased from a number of online vendors.

As always, Iowan mushroom fans should be aware that growing psilocybin spores into mature mushrooms can lead to major criminal charges, including the manufacture of a controlled substance.

Iowa Code Ann. Section 124.203 specifies that psilocybin is a Schedule I CDS, or Controlled Dangerous Substance. This puts it in the same circles as some drugs traditionally viewed as far more dangerous, including heroin. Because of this classification, the possession of magic mushrooms in Iowa can cause serious legal heartache, including fines or even imprisonment.

Drug sentencing in Iowa for possession can vary greatly, as is the case with most U.S. jurisdictions. Some individuals convicted of possession in Iowa might end up with statutory fines, while others might be given lengthy jail sentences.

The future is unsure, but there are a couple of reasons to be excited about the direction of Iowa’s drug laws regarding psilocybin. For example, a Republican lawmaker recently introduced an amendment to an existing budget bill that would have effectively decriminalized psilocybin within the state. Although the bill failed, this might set the groundwork for future attempts to relax the state’s prohibition on magic mushrooms.