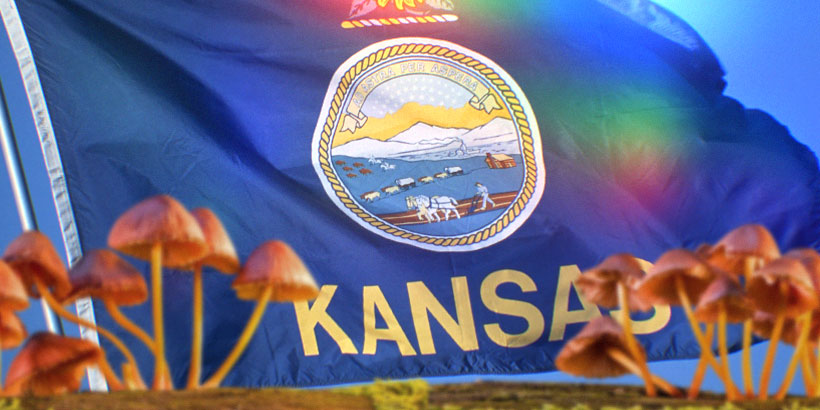 Kansas is a pretty straightforward case when it comes to the legal status of psilocybin mushrooms. At the time of writing, the state has made no substantive progress in removing psilocybin from its list of controlled substances. It does not appear that Kansas legislators are interested in legalizing or decriminalizing psilocybin mushrooms within their state.

Only three U.S. states criminalize the possession of magic mushroom spores. Luckily for mushroomers in Kansas, their state is not a member of this exclusive group. It is completely legal to possess magic mushroom spores in the state of Kansas, as these spores do not yet contain the hallucinogenic compound psilocybin.

Once the spores fruit into fully grown mushrooms, they are then illegal to possess, sell, or transport. This is a bit of a tricky nuance, so it’s important that Kansas citizens refrain from growing their magic mushroom spores into full mushrooms.

The main law regulating psilocybin in Kansas is Chapter 65, Article 41, Section 5 of the state’s book of statutes. This regulation places psilocybin in the most serious classification for drugs, Schedule I. This means that the state determines that psilocybin has both a high potential for abuse and a lack of substantive medical applications.

Getting caught in possession of psilocybin mushrooms in Kansas can be extremely serious because of this statute. Penalties for possession can vary from case to case, but can always include jail-time, mandatory drug rehabilitation treatment, or statutory fines.

There’s little reason to suspect that psilocybin laws in Kansas will shift in the near future. The best hope for decriminalization advocates might be that the state buckles to peer pressure as other jurisdictions around it begin to relax their own restrictions on magic mushrooms. But for now, psilocybin mushrooms remain regulated as a Schedule I controlled substance.