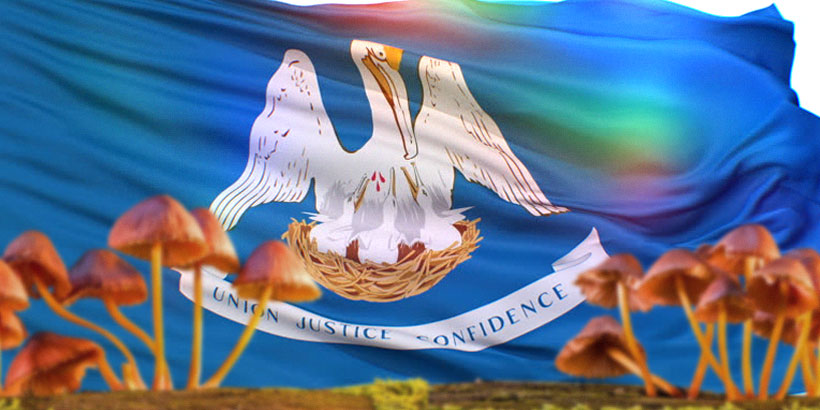 Psychadelic mushrooms are extremely illegal in the state of Louisiana. Lawmakers in this state classify psilocybin as a Schedule I (C) controlled substance. Along with other hallucinogenic drugs like LSD, psilocybin is prohibited under Louisiana law. Possession of magic mushrooms can carry serious criminal penalties, including fines, imprisonment, or both.

Louisiana law doesn’t vary much from what we’ve seen in other states, especially when it comes to psilocybin and drug scheduling. Magic mushrooms are in the same drug schedule as heroin, meaning that they are considered both highly dangerous and infrequently applicable for health purposes. One unique aspect of Louisiana drug law is that the state places psilocybin under a specific subset of Schedule I known as “hallucinogenic drugs.”

Our article should run readers through the most important aspects of Louisiana law concerning psilocybin.

Like the vast majority of U.S. municipalities, Louisiana considers psilocybin mushroom spores to be completely legal. Louisiana lawmakers have not banned psilocybin spores because these spores do not actually contain psilocybin. Once these spores fruit into mushrooms, however, they develop psilocybin and become illegal under both state and federal law.

We advise fans of psilocybin mushroom spores to be extremely cautious. While the spores are legal, growing them could lead to drug manufacture charges, which are almost always felonies and can carry serious penalties.

The main drug law that lays out scheduling in this state is R.S. 40:964. According to this statute, psilocybin is considered a Schedule I (C) controlled substance. It seems to be the case that Schedule I (C) drugs are considered slightly less dangerous than the Opiates in Schedule I (A). It is unclear how this might affect sentencing for citizens caught in possession of psilocybin.

Louisiana is known for its particularly tough stance against drugs, including psychedelic like marijuana.

It is unlikely that Louisiana will adopt more progressive psilocybin policies in the near future. Given the state’s reluctance to address ages-old marijuana laws, they will likely be one of the last jurisdictions to adopt a decriminalization policy for magic mushrooms.