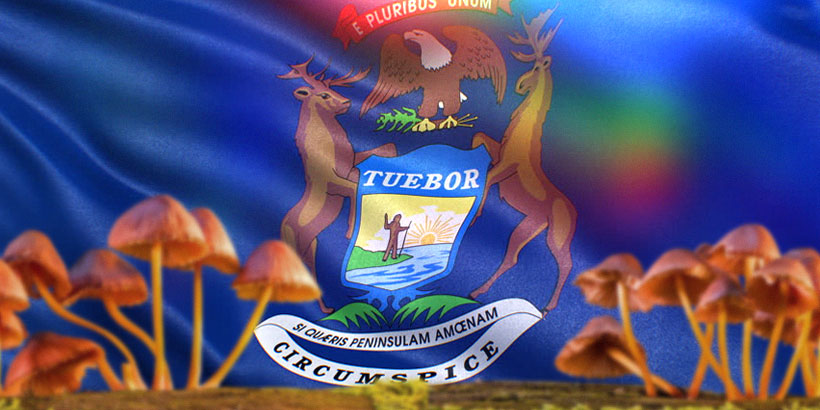 Despite the recent legalization of recreational marijuana in the state, Michigan remains one of the most restrictive states for drugs in the entire country. Repeat offenders of drug possession crimes might face a sentence of life in prison. For this reason, most lawyers will warn drug offenders that getting arrested in Michigan is extremely serious business.

Unfortunately, this reputation for strictness makes no exception for psilocybin, the key psychoactive compound that gives magic mushrooms their magic. Under Michigan law, psilocybin is a Schedule I controlled substance. Possessing it in any amount could potentially result in a felony charge. This small article should outline some of the main points of interest regarding psilocybin law in the U.S. state of Michigan.

Fortunately for lovers of magic mushroom spores, it is legal to possess undeveloped psilocybin spores in the state of Michigan. A fair warning, however: growing these spores into fruited mushrooms is a serious crime. Citizens who grow magic mushrooms could face felony manufacturing charges, which almost invariably result in serious criminal penalties.

Spores of magic mushrooms are legal in Michigan because they do not contain psilocybin. Once these spores are grown into mushrooms, they then develop the compound. At this point, they are no longer legal to possess anywhere in the state of Michigan.

Section 33.7212 of Michigan’s public health code establishes five ‘schedules,’ which determine the danger and criminal penalties associated with all regulated substances in the state. According to this law, psilocybin is a Schedule I substance. This places it in the same realm as serious opiates. It does not appear that Michigan considers hallucinogenic Schedule I substances any less serious or dangerous than the opiates in this same schedule.

Because of the state’s strict punishments for possession, holding psilocybin mushrooms can result in serious fines or imprisonment.

Even though the state seems to be moving in the right direction in light of their recent legalization of recreational marijuana, it seems unlikely that psilocybin will be similarly decriminalized. As of right now, possessing psilocybin mushrooms in the state is a major crime.